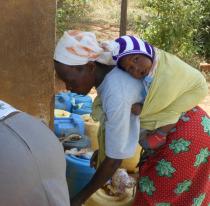 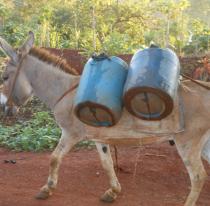 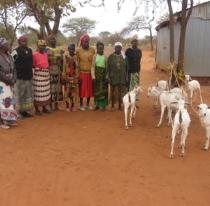 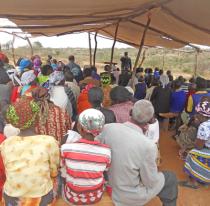 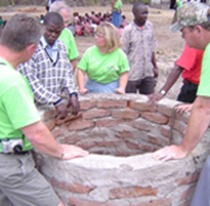 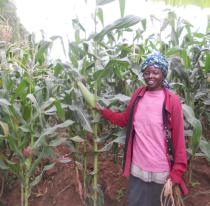 Historical Look at the “Caring for Kenya” Mission

In a sense the mission work began in 1989 with the conversion of Erastus Kavuti.  Erastus Kavuti, a member of the Kenyan Air Force, was sent to the U.S. for training.  He became a Christian at Lackland Air Force Base in Texas.  He arrived at Chanute Air Force Base in Rantoul, Illinois as a new Christian.  After 9 months with the church in Rantoul Erastus decided he wanted to return to his village (Tulia, Kenya) to share the Gospel with his family and friends.  In 1995 “Caring for Kenya” was formed to provide support for Erastus as he attended the 2-year Nairobi Great Commission Preacher Training School.  In 1996 Erastus began to teach and preach at his village and established the Kavonge Church of Christ.

In 1998 the first U.S. Mission Trip to Kenya took place.  Erastus told us “We want to be known as the church that cares.  We want to meet physical needs and develop relationships so that we will have opportunities to meet spiritual needs”.  We agreed to purchase land and fund the construction of a church building.  The 2001 Mission Trip focused on providing Bibles, Bible Study Material, Children’s Bible School Lessons, medical supplies, clothes, a solar collector, a motorcycle, and well drilling equipment.  As the Kavonge Church grew they planted two more congregations (Masaani and Zombe).  James and Abraham completed training at the Nairobi Great Commission School.  Since James had three years of medical training and was licensed by the government to operate a medical clinic we decided to begin operating a mobile medical clinic.  James used the motorcycle to travel between congregations to treat patients.

In 2004 we brought Erastus to the U.S. to spend time in discussing the future.  We joined the Danish government, the Kenyan government, and the Red Cross in a project to bring two deep wells to the Tulia community.  The wells are capable of providing clean water to 10,000 people.  The 2005 Mission Trip to Kenya included Gospel Meetings, community Bible studies, Bible class teacher training, a computer workshop, agricultural workshops including the use of drip irrigation, and more medical supplies.  In 2006 famine conditions led the U.S. Mission partners to donate $9000.  The money was used for food distribution, to pay hospital bills, help with school fees, and to purchase hybrid seed for planting.  In January 2007 our mission trip evaluated the use of famine relief funds and made plans for the future.  Team members learned the importance of assisting poor families and orphans with school fees.  They came home with a list of 22 students needing an American family to sponsor their education.

In July 2007 a 10-member mission team, including 6 women, visited the congregations and also the schools where sponsored students attended.  In discussions with the Kenyans the idea of establishing our own school was formed.  We identified 16.5 acres as a potential site for the school.  The team came home with a list of 45 students needing a sponsoring family and a plan to build a school.  In 2008 the $16,000 needed was raised and the land was purchased.  Erastus visited the U.S.  Money for the 2008 famine was raised, community development project plans were shared, school fund raising plans were made, and 61 students needing a sponsoring family were presented.  Justus Mutua was trained as the Caring for Kenya (CfK) Community Development Director.  Through his direction, CfK “helps people help themselves”.  Through the use of mini-loans and grants, startup businesses such as rabbit raising, chicken raising, vegetable gardening, and market day stands are helping people feed their families.  Goat raising, soap making, sewing, farming, and basket making cooperative are being established.

Since 2007 at least one CfK group has traveled to Kenya each year.  CfK continues to assist in meeting physical needs and creating opportunities to meet spiritual needs.  Ongoing projects focus on food production, bringing clean water, improving health care, providing education, and expanding community development as well as training preachers and supporting and encouraging Christians in the nine local congregations.