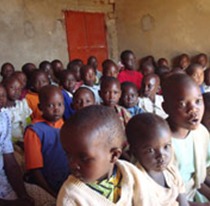 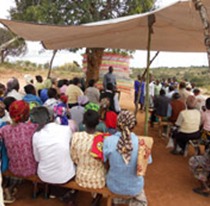 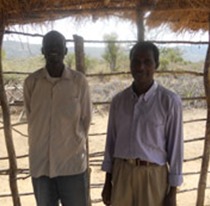 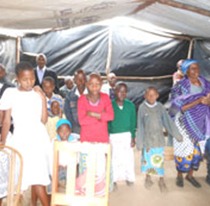 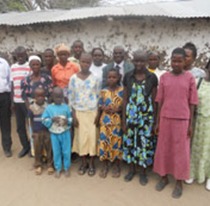 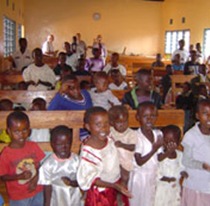 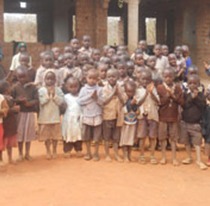 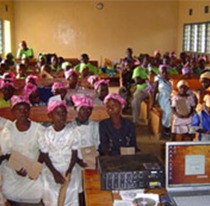 In 1997, the first congregation in Kenya was started in Kavonge in the home of Erastus Kavuti. The church grew remarkably!

The Preachers at Kavonge Church: Erastus Kavuti Justus Mutia Justus Vundi
Their Story: Erastus Kavuti is their preacher. He is assisted by Abel and Lewis. While in the Kenyan Air Force Erastus was sent to the U.S. for training. While in the U.S. he became in Christian. After completing his Air Force commitment and two years at the Nairobi Great Commission School he returned to his village as the only Christian. Now five more congregations have been planted. James Kitengu, one of Erastus first converts, is licensed by the Kenyan government to operate a medical clinic. He has also attended NGCS and preaches part time. From his home base at Tulia he operates the mobile medical clinic between the congregations traveling on a motorcycle. The congregation typically has a worship assembly of 90 to 120. In addition the children’s Bible class has around 60 in attendance. Erastus reports seeing more committed people using their talents for the Lord. In the past year they report 26 new Christians. The Kavonge church hosts a monthly leaders meeting with a meal for the leaders from the six congregations. They also host an annual ladies workshop for approximately 40 ladies from the six congregations.

The Preacher at Masaani Church: Daniel Vundu
Their Story: Abraham Kivesi, a graduate from NGCS, and his wife Anne along with daughter Ruth have moved to Masaani. In addition to serving as the evangelist, along with recent NGCS graduate Michael, Abraham has been directing the construction of a new church building. Their temporary building is made of corrugated steel. The permanent building being completed is made of baked bricks with wooden trusses covered with corrugated steel. Water, sand, and small rocks are being hauled with oxen and donkeys for mixing concrete. Members of the congregation made bricks. The church averages 35 to 45 members for worship assembly and 40 children for Children’s Bible class. An agricultural demonstration plot has been developed on the church property using raised planting beds high in organic matter and equipped with the drip irrigation kits we brought from the U.S. Felister teaches at the church pre-school and the congregation is currently establishing a community primary school grade 1 and 2. Two classrooms are being built.

Their Story: Josphat Kinyungu is the preacher at Nwaza. He was converted from the African Inland Church. The congregation was established in 2006 and is growing spiritually and numerically. Josphat reports that some people have left the church during this past year because of the famine. They focused their efforts on searching for food and jobs. Famine relief has made a big impact on the people.

The Preacher at Kaviki Church: Matthew Muli
Their Story: Jeremy established this congregation in 2006 with 8 WBS converts. They meet in a school building and have grown to 25 adults and several children. They are currently buying land and preparing to build a church building. Matthew will complete his preacher training through the NGCS extension program in 2009 and shares the preaching responsibilies with Jeremy.

Their Story: In March 2008 the Mwangya congregation was established. Members from the Kavonge congregation worked with Justus Mwendwa (recent NGCS graduate) and James to plant this congregation. Already the congregation has 25 adults and 50 children attending.