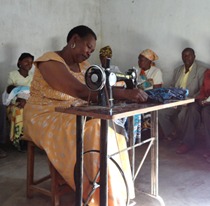 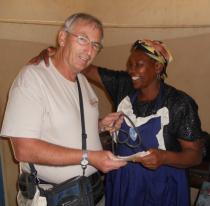 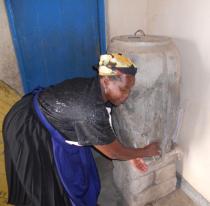 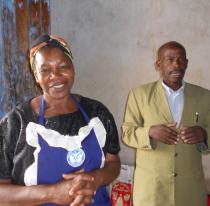 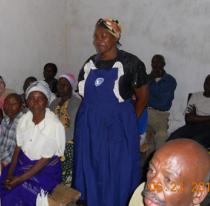 At the death of her sister, Celestine returned home to the small village of Nzawa in eastern Kenya.  After having served at a mission hospital and working with a mobile medical clinic for 32 years, she took over the little medical clinic and the second hand clothing shop that her sister had started.  Caring for Kenya (CfK) preacher Lewis Kamwithi during an evangelist trip to the Nzawa area shared the Gospel with her.  He said “after I had spoke too much and read the Bible too much, she said “stop and review my progress by answering my questions”.  After her questions were answered she said, “I will think about the message”.  After a time she accepted the message and in December, 2009 Joseph Kinyungu baptized her into Christ.

While Celestine has gone through several courses that pertain to nursing including Trainer the Trainers Course on Community Health, she is still dreaming of  getting  some additional training.  She has four grown sons, ages 23, 29, 32, and 34.  In 2009 Caring for Kenya funded the youngest son’s last year of secondary school.

In June, 2010 Celestine was a student in the food preservation workshop co-sponsored by Caring for Kenya and Healing Hands International.  The next week after the workshop CfK team members visited her clinic to take medical supplies, water filters, blankets, and mattresses provided by HHI.  She works mostly with very poor people.  Erastus Kavuti described Celestine as a kind caring compassionate woman.  During the visit to her clinic she mentioned that her stethoscope and blood pressure machine were broken.   She was overjoyed when given the funds to buy new ones

Celestine planed and organized a food preservation workshop for 21 women in her community.  In addition to operating her medical clinic, teaching food preservation, and selling used clothes, she has started a sewing coop.  With the donation of three sewing machines from Healing Hands International, women are learning to sew.  Would you like to provide another sewing machine or start up supplies of material, thread, and needles?    This is a story of how impacting one woman can result in her impacting many more.  We can change the world one person at a time, one village at a time.

Changing Lives One at a Time: The Story of Celestine